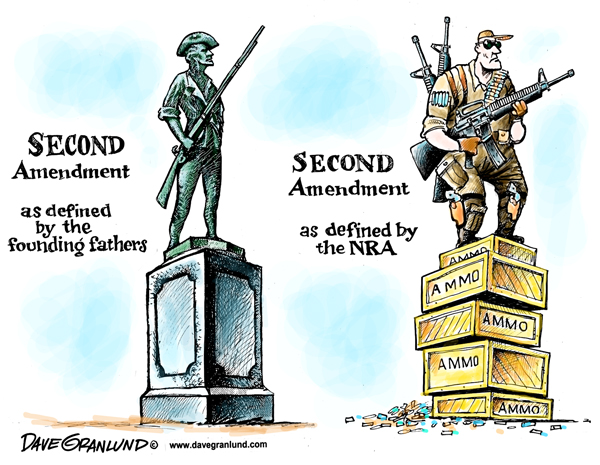 Let’s stop eulogizing the founding fathers. Some of them were brilliant men, but they were not saints and their work is not sacrosanct. Like the men that wrote the bible, their directives are sometimes anachronistic and many are profoundly inappropriate for todays world. The average high-schooler can’t even tell you if they were written by the government or Charles Dickens.

It’s time to get with the program. Even dogmatic fundamentalist Christians eventually replaced the Old Testament with the New & Improved version.

“A well regulated Militia, being necessary to the security of a free State, the right of the people to keep and bear Arms, shall not be infringed.” The wording has left the amendment open to public debate for more than 200 years. But there should be no debate. Just as Roe v. Wayde was step out of the shadows, so in its last major decision on gun rights, in 1939, the U.S. Supreme Court unanimously established the must constructive interpretation of the 2nd Amendment. But on Tuesday 26th June, five members of the U.S. Supreme Court reversed that decision and edited the 2nd Amendment. In essence, they said: Scratch the preamble, only the last 14 words count.

In doing so, they have done the opposite of what the founding fathers intended. They have curtailed the power of the legislatures and the city councils to protect their citizens and bring themselves into the twenty-first century.

The majority opinion states that the D.C. handgun ban and a requirement for trigger locks violate the 2nd Amendment. By virtue of this decision, Chicago’s 1982 ban on handguns is not likely to survive a court challenge. A lawsuit seeking to overturn the Chicago ordinance was filed on Thursday by the Illinois State Rifle Association. God help us all. The murder rate in Chicago has risen 13 percent this year. Guns are still the weapon of choice for mayhem in the U.S. About 68 percent of all murders in 2006 were committed with a firearm, according to the U.S. Department of Justice.

Wayne LaPierre, a top official at the National Rifle Association, says his group will file lawsuits in San Francisco and Chicago, among other places. “I consider this the opening salvo in a step-by-step process of providing relief for law-abiding Americans everywhere that have been deprived of this freedom,” he told the Associated Press.

Yes, let’s drag this country back into the Wild West, because it was so safe back then. And while we’re at it, let’s bring back lynching – and capital punishment for horse theft.

Gun lovers and the NRA says “An armed society is a police society.”

The truth is that polite societies do just fine (and dandy) without guns. The United Kingdom’s own police force has operated since 1839 largely without guns. The U.S. has more shootings in one day then the U.K. has in an entire year – or ten. Indeed, if you have a gun in the U.K. (and most other civilized countries) you have only one right – the right to go directly to jail. Do not pass Go – Do not collect $200. Those Brit’s crazy logic goes something like this: Handguns are for killing humans, killing humans is against the law, ergo, hand-guns should be illegal. What part of this isn’t making sense to us?

Repeal the 2nd Amendment? Yes, it’s an anachronism. While we can still walk into a Wal-Mart and say “A pint of skimmed milk and a Glock, please,” this country will never achieve international respect – or its full potential as a modern society.