Oklahoma’s botched execution of convicted killer, Clayton Derrell Lockett in April 2014, proves once again that America, or at least the bottom half of it, is still living in the 19th century. Which is fine, except the rest of the country is tarred with the same barbarous brush, once again making us the laughing stock of the world (which still laughs regularly at our inability to solve other nineteenth century problems like religion, abortion and basic gun control). 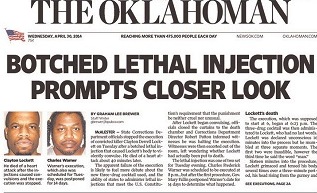 Because for Europeans, arguing over whether one drug cocktail is a better killer than another, is tantamount to arguing over whether or not witches should be drowned, or just burned at the stake. They don’t entertain such debates because they understand that the premise itself is flawed. The death penalty is simply an archaic institution that most civilized countries dissolved many decades ago, rather like believing there are gods in the heavens who are angered when humans mis-behave. Oh wait, America’s still big on that one too.

John Oliver recently took America to task on its death penalty stance in the second chapter of Last Week Tonight which deftly dismantled some of the the ridiculous arguments in favor of the death penalty with the characteristic disdain late night TV serves up so well.

Oliver noted that when it comes to nations that still practice the death penalty, we are in very poor company indeed. It’s Who’s Who list you wouldn’t normally want to be on, but there we are, along with Iran, Iraq, China and Saudi Arabia. We’re smiling happily for the camera and chewing tobacco, with our trucks in the background. The same trucks that have a copy of the Good News bible in the glove compartment – and a gun rack above the flatbed. Gotta love that “An eye for an eye stuff.”

So while “experts” wring their hands in debate over just how tricky it is to come up with a “humane” method of execution, let’s start by pointing out a few obvious facts about death, before solving the argument once and for all.

It’s not complicated. Anyone who’s had their dog put to sleep, knows that it’s perfectly possible to have life removed from a body in just a few seconds without making a meal of it. Let me ask you this: when you had your dog put down, did the vet make excuses about not finding “good” veins? Were multiple lines connected to Lassie, each carrying a different drug, so that precisely the right cocktail was created? Did the dog suffer horribly, convulsing for several minutes, with death still not pronounced for a further ten minutes?

You know what, forget dogs. Just ask any Heroin addict how easy it is to die comfortably – accidentally. Or you could read about deceased pop star, Michael Jackson’s inadvertent rendezvous with the Grim Reaper. And what about those tiny cyanide capsules that the Nazis bit on during the war, that had them keeling over stone dead in a matter of seconds?

In 2010, Former UK Conservative Member of Parliament, Michael Portillo, made a BBC documental to end the debate. In The Science of Killing Human Beings, Portillo researched the various methods of state execution And the solution is remarkably simple, assuming you really can’t get over your antediluvian taste for human sacrifice. 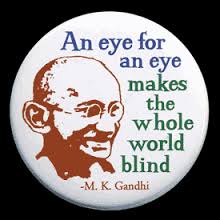 It’s called hypoxia, which is just a fancy way of staying brain oxygen starvation. High altitude mountain climbers succumb to it every year, and pilots and passengers have been killed by it in flight during explosive decompressions. It’s quick, it’s easy and it’s painless. It might even be pleasant.

And there lies the problem. Because when the truth finally comes out in Michael Portillo’s documentary, America really isn’t looking for a humane solution. It secretly wants its victims to die in pain. It wants them to suffer for what they have done to their victims, and the “debate” on which method is the most humane is nothing more than lip service because “cruel and unusual punishment” is exactly what many Americans have a taste for.