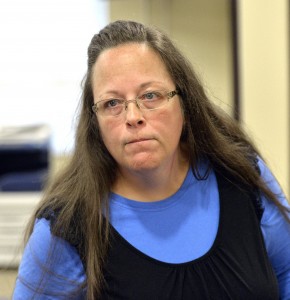 Kim Davis, the Kentucky clerk who refused to issue marriage licenses to gay couples, is in jail – where she belongs.

Because given the option, she would continue to use her “religious freedom” to take away the freedoms of others. This is unacceptable in any first-world country.

Her notion that religious freedom is under attack would be laughable, were she not so delusional, and her ideas not so dangerous. Because, clearly, there is a world of difference between the way that her beliefs impact the lives of gay people and the way that gay people getting married impact her life.

The “violation of conscience” argument is entirely bogus. How about we just make slavery legal again? After all, the bible is very pro slavery. Hell, how about we all just do whatever the hell we like, based on what we think some god is whispering in our ear.

What if a flight attendant doesn’t want to serve alcohol to passengers because of their religious beliefs?

Or a taxi driver who refuses to pick up passengers carrying alcohol?

Really? Check out these recent posts: 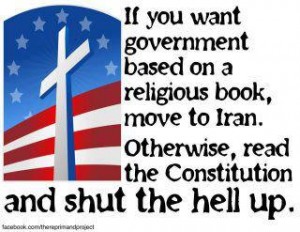 The truth is, if religion is allowed into politics, there will be a religious argument against just about anything. And a modern society cannot tolerate that.

This is a far bigger fight than many of us realize. If the fanatical evangelicals are allowed to get away with this sort of BD, we will be back in the religious dark ages before you can scream “Heresy!”

If fanatics like Davis are allowed have their way, gay men and lesbians will not only be denied marriage licenses, but homosexuality would likely be deemed illegal again. Instead of Davis being in prison, millions of gay people would be there in her stead. And if the real fanatics prevail, then homosexuals could even receive the death penalty for sodomy, just as they do today in Iraq, where gay men are thrown from the top of buildings at the mere suggestion of being gay.

The rational among us must fight tooth and nail to protect our society against such a nightmarish backslide. So many lives depend upon it.

Let’s be clear here, because it’s actually very simple. Religion is not under attack. But religious bigotry is. As it should be.

Yes, Kim Davis, you have religious freedom to hate as much as will fill your small mind. But that religious freedoms does not include the right to take away the freedoms of others. Because your god is not our god.

Like a small child sent to its room, Davis must stay in jail, until she understands that her religious chauvinism will not be tolerated.

And Huckabee, you’re a moron. You have no business running for president. Next time you’re ordering a Big Gulp at 7-Eleven, don’t be surprised if the cashier reminds you that gluttony is a sin and refuses to serve you.