The Huffington Post reports that Kim Davis, jailed for contempt of court, after refusing to issue marriage licenses to same-sex couples, was released from jail today. 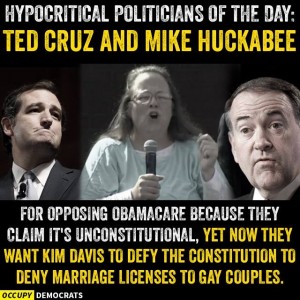 Never mind the rock star music and media circus, never mind the mind-blowing hypocrisy of a woman defending the “sanctity of marriage” when she’s been married four times herself. It is clear that she will not be allowed to prevail.

What is also clear, and perhaps as compelling from a political standpoint, is the side-story that is being over looked by many.

Presidential candidates Ted Cruz and Mike Huckabee have just disqualified themselves from political office. By visiting her in jail, by showing up at the Davis release rally, and for putting their religious predispositions before the rule of law, they have proven that they cannot be trusted to hold the highest office of the land.

“Kim Davis is free!” declared Huckabee to loud cheers, as he offered to go to jail in her place.

And so are you, Mike Huckabee. Free to return to the pulpit, where you belong.