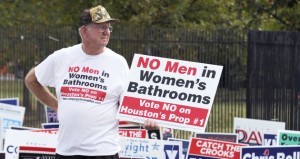 Houston, you have a problem.

Many of your citizens have been obsessing. Not about things that matter, like global warming or international terrorism, but that some of your number might want to hang out in female bathrooms.

Yesterday, in an attempt to stop a problem that doesn’t even exist, Houston voters misguidedly voted down a measure that would have helped prevent discrimination throughout the City.

Prop. 1, or Houston’s Equal Rights Ordinance, also known as HERO, would have barred discrimination on the basis of race, age, military status, disability and 11 other categories.

But it was HERO’s proposed protections on the basis of sexual orientation and gender identity that attracted the most attention. After a bitterly fought campaign, opponents of HERO eventually succeeded in scaring the majority of voters into believing the ordinance was all about allowing men in women’s bathrooms. And in the end, the bigots triumphed. 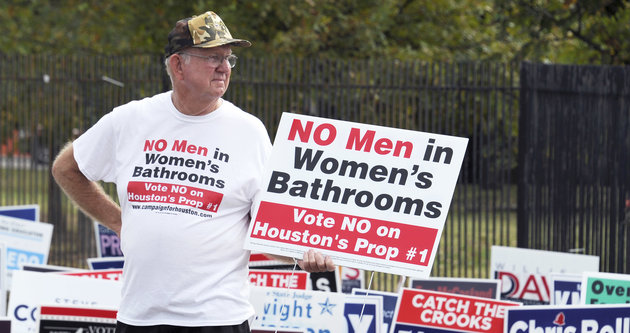 One of many Stupid Fucks in Houston TX

For a while, it looked like Texas had actually joined the ranks of the enlightened. Last year, the Houston City Council narrowly approved the equal rights ordinance, but after a petition drive by anti-gay activists, the Texas Supreme Court ordered the city to either repeal it or put it on the November 2015 ballot.

Conservative activists rallied against Prop 1, garnering support from the likes of Lance Berkman, who used to play for the Houston Astros. Berkman cut a video ad saying he was concerned about the safety of his female family members if HERO passed.

“Proposition 1 would allow troubled men who claim to be women to enter women’s bathrooms, showers, and locker rooms. It’s better to prevent this danger by closing women’s restrooms to men, rather than waiting for a crime to happen,” he said stupidly.

When the measure was repealed, Jared Woodfulla spokesman for Campaign Houston, apparently trumpeted. “Our message worked.”

But here’s why Houston voters may have just made the miscalculation of their lives: 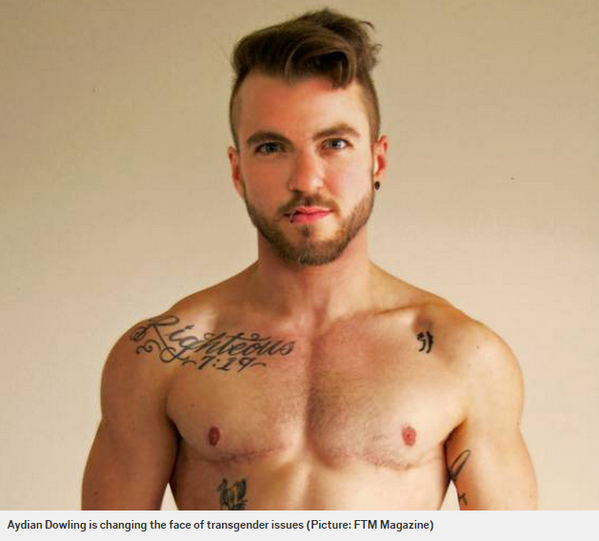 Born female, Aydian can walk straight into a women’s bathroom any time he feels like it. That’s because he’s female.

Since this is apparently what the good people of Houston want, perhaps he should. But if he does, how long do you think it would be before one of the upstanding folk that voted down Prop 1, called the police?

But just to prove the bat-shit crazy logic of the people of Houston, we’d like to invite Mr. Dowling to take a flight to Texas and spend the day wandering in and out of women’s bathrooms, at his leisure.

The inability of your average Houstonite to think through their own arguments to their logical conclusions is what earns anti-HEROS “Stupid Fuck” status: Their actions have now ensured that their worst nightmares can be realized.

So Houston, now you have a real problem:  Transgender men, in all their masculine glory: Coming to a bathroom near you soon.