Stop The World, I Wanna Get Off ! features topics that will likely make you laugh cry or scream, but most of all, we hope the posts make you think – because the human race is currently un-thinking itself into a quagmire. We’re in danger of becoming a nation that has completely lost the ability to think critically or honestly on almost any subject: we’ve become intellectually corrupt. 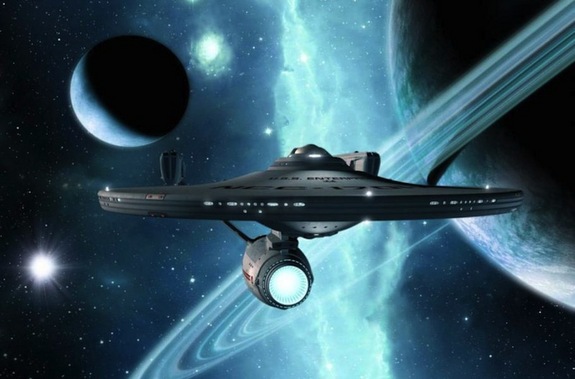 And while I wouldn’t call myself a Trekkie – I do think there is something to be learned from our fictitious future.

The most obvious appeal of Star Trek lies in its anticipation of human technological advancement and in its ability to entertain the dream that along with phasers and transporter beams, we may one day acquire the secrets of our universe.

But there is something else. I believe that the real seductiveness of Star Trek is tied up not with technology, but with the show’s ability to predict the direction in which a new human ethic might eventually evolve: on board the Star Ship Enterprise, Captain Kirk and his crew have conquered not only science but also their darkest fears, banishing feeble-mindedness, superstition and the politics of difference, in favor of logic, common sense and solidarity.

In our fictional future, human integrity has finally caught up with human technology. And although humans, at the dawn of the twenty-first century have already begun to boldly go where no one has gone before, one thing is painfully clear: while our future aboard some warp-capable star ship is almost certainly assured, our destiny as emotionally competent and worthy crew members is far less certain.

With this in mind, the question that should be occupying the minds of both “Trekkies” and philosophers alike in the second Millennium is this:

Will the Human Race succeed in closing the gap between its technological and its ethical development in time for the two to meet seamlessly, as the screen writers would have it?

Right now, it’s not at all certain we will make that deadline.

In his recent devastating indictment on American society, Chris Hedges notes that a massive chunk of this country has slipped so far into mediocrity that it has literally lost the ability to tell the difference between lies and truth. Everything has become relative.

“The core values of our open society, the ability to think for oneself, to draw independent conclusions, to express dissent when judgment and common sense indicate something is wrong, to be self-critical, to challenge authority, to understand historical facts, to separate truth from lies, to advocate for change and to acknowledge that there are other views, different ways of being, that are morally and socially acceptable”, are dying, he says.

On almost every subject from global warming to sexual orientation and religion, we are informed by simplistic, childish narratives and cliches that are thrown into confusion by subtlety or the invasion of alternate viewpoints. What’s worse is that even when we recognize the truth, we dare not speak it. We have become an entire nation of people dressed in the Emperor’s New Clothes.

Without clear thinking, the human race is doomed to failure – and the movie Idiocracy hints comically at where our collective future might lay – and it’s not on board the Enterprise.

Stop The World attempts to make transparent the foolishness of our every day thinking with a mixture of humor and political incisiveness that we hope will motivate you to refuse to be held hostage to every day platitudes, or plain bad faith (what the French like to call Mauvaise Foi). We hope our site will help you make simple but common sense observations about the nonsense that plays out in our world, day after nauseating day.

Don’t give in to it.