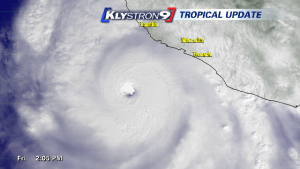 Sure, it could be just a co-incidence, but global warming theories predict exactly this sort of situation.

Her name is Patricia, and NOAA43 just measured flight level winds of 220 mph, surface wind estimates at 191 mph. It’s so large, the photographs look like something out of an Hollywood disaster movie. 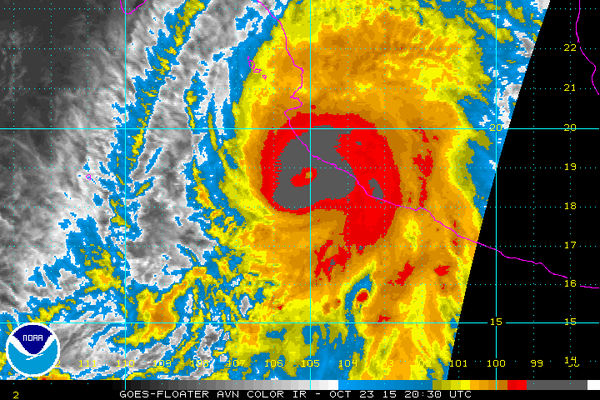 At 4 p.m. CDT, the eye of Hurricane Patricia was about 60 miles (135 kilometers) southwest of Manzanillo, Mexico, moving north-northeast at 14 mph.

Patricia should make landfall in Jalisco Friday evening as a Category 5 hurricane. Residents and authorities in Mexico are rushing to prepare for what will likely be the strongest hurricane to ever strike the Pacific coastline.

In addition to its unprecedented winds, Hurricane Patricia also holds the record for lowest pressure in any hurricane recorded. With a minimum central pressure of 880 millibars (25.99 inches of mercury) at the 4 a.m. CDT advisory, Patricia broke the prior record of 882 millibars set by Wilma almost exactly 10 years ago.

Rainfall of 8 to 12 inches — and possibly 20 inches in some spots — “could produce life-threatening flash floods and mudslides,” according to the U.S. weather agency.

Even if global warming is part of a natural global trend – even if this climate change is not completely caused by human activity, can we at least agree that it’s actually taking place, instead of having state leaders deny, that anything unusual is happening, in spite of all the scientific evidence to the contrary?

We saw what hurricane Katrina did, and this one could be biblical.

Newer PostWhy This Guy Is A Stupid Fuck
Older Post9 Reasons Denmark’s “Socialist” Economy Leaves the U.S. In The Dust