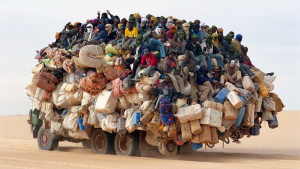 As website Day of 6 Billion notes, the human world population reached a staggering six billion on or around October 12, 1999. And for some reason, instead of this being a sobering moment of world reflection, we jumped up and down like the idiots we are, cheering and clapping as if it were new year’s eve – and during that hour of TV reportage, another eleven thousand hungry mouths were born.

The Census Bureau’s new projections indicate that the 7 billion marker will be reached in just four more years – by February of 2012. Give or take a month.

This means more and more people competing for fewer earthly resources – like oil which leads us to war. It also means more famine; the extinction of other species as we overrun their habitats; the pollution of the seas, the destruction of the ocean’s reefs – and the decomposition of the ozone layer. In fact, when you think about it, most of the problems we face in this world could be mitigated by having fewer people. So tell me, what exactly were we celebrating? The demise of our own planet?

Some have argued that if the entire population of the world stood shoulder to shoulder we could still probably fit on relatively fairly small space – thus they call overpopulation a population hoax. These to fail to realize that we thrive on only about 17% of the world’s surface – they also don’t understand mathematics very well. Because after many thousands of years of population “incubation”, our growth as a species has finally gone noticeably exponential. 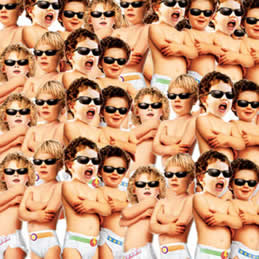 Born in the last 10 seconds…

Like multiplying bacteria on a laboratory petri dish, exponential growth is hard to spot at first, but when a critical mass is reached, the numbers explode. Watch this video of the World Population clock at the Columbus Zoo to see exponential population growth in action – and then figure out for yourself just how long it will take from this point before our race has consumed every square inch of livable space this planet.

It is for this reason that environmentalists like GreenPeace and Sea Shepherd founder Paul Watson have said mankind is acting like a virus and is harming Mother Earth. The analogy is simple, and like a virus we are slowly but surely killing our host.

And props to the Chinese by the way. Because at least they are trying: that’s one kid per family, thank you very much. Meanwhile here in the “first world” west, Catholicism’s criminal Every-Sperm-Is-Sacred doctrine against contraception just leads us closer to the brink of our own extinction.

In the time it took you to read this post and watch the video, the earth’s population grew by about 1260 people.