There was once an grand elephant who, as he grew old, developed a malignant tumor. Being a proud creature, the elephant refused to seek help, thinking the illness would eventually pass. A canny, neighboring donkey advised that the tumor be excised immediately but the elephant, thinking that the disfigurement made him look more strong-featured, declined to act.

Eventually, the tumor grew so large that the elephant became crippled and could barely stand. As the elephant began to shake, the donkey galloped up to the elephant and mocked him indignantly for his foolishness. He got so close in fact, that when the elephant suddenly collapsed, the donkey found itself caught underneath the wheezing leviathan. In the end, the donkey could do nothing but bray in protest as the air was slowly squeezed from its lungs, and it breathed its last breath. A passing vet, seeing the scene unfold arrived just in time to save the elephant, but alas it was too late for the donkey. 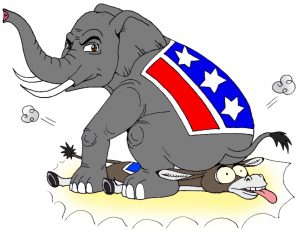 Donald Trump’s election victory is a battlefield laden with lessons for both parties but in the final analysis, it was the fatal, self-inflicted injury of the Democratic Party that will perhaps be remembered above all. The truth is, this was Hillary Clinton’s race to lose, and lose she did, to a candidate whose unworthiness for the position of President of the United States can never be overstated.

This substance of this mortal injury is so incomprehensible to the hard left that it seems unlikely it will ever be remedied, but the sad truth is that the loss of the election was largely due to a failure by the left to come clean with the American public and examine honestly the problems that, legitimate or not, concern so many regarding immigration and Islamic terrorism. The Democratic election plan was a vague hope that the fears of the American people regarding these issues could be assuaged and swept under the carpet with half-truths and unreason. This, despite the Brexit vote in the U.K., which had already warned that this strategy would likely fail.

In the final analysis, the Clinton campaign made a fatal miscalculation. They thought that their shell game was simply superior to that of their overseas cousins. And they forgot the first rule of marketing: Never believe your own publicity.