More ocean warming in Australia, more coral bleaching on the Great Barrier Reef. And while there is a theoretical prospect for recovery if the temperatures return to normal, temperature stasis seems increasingly unlikely.

Warm ocean waters delivered a blow to the Reef in 2016, now experts say there is “zero prospect for recovery” for a large portion of the reef. 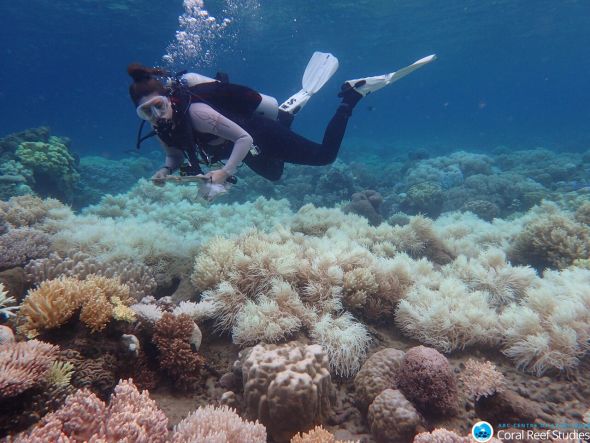 A diver surveys coral near Orpheus Island in March of 2017. (Photo/ARC Centre of Excellence for Coral Reef Studies/Greg Torda)

“The combined impact of this back-to-back bleaching stretches for 1,500 km (900 miles), leaving only the southern third unscathed,” Prof. Terry Hughes, director of the ARC Centre of Excellence for Coral Reef Studies, said. He believes that the bleaching is caused by global warming, which is causing sea temperatures to rise.

Coral takes at least a decade to recover, said Dr. James Kerry, a senior research officer at ARC and with no prospect of sea temperatures dropping any time soon, the fate of portions of the reef could be sealed.

For tourists expecting to see a wide variety of ocean life in the coral, they may be left disappointed, said Dr. Maria Beger, an academic fellow in marine conservation biology at the University of Leeds in the United Kingdom.

The researchers stressed that the only viable solution is to cut carbon emissions in order lower ocean temperatures.