Will someone please explain the outcry regarding mommy dearest in California? I thought we couldn’t eject enough of these little bundles of joy into the world?

Don’t get me wrong, I love kids just as much as the guy next door (okay, he is a registered sex offender), and I know the human race depends on procreation (like we don’t have a population problem already). Besides, without kids who else would pay for my social security when I get old, or visit me to swap out my fetid bed pan (like any self-respecting, Gen-Y kid would want to spend time with grand-pa these days – except to collect the annual birthday check). It’s just that I was born without this paternal desire to show the world what a proud and brilliant man I am because my sperm can produce something I can neither afford to pay for, nor am qualified to properly raise. 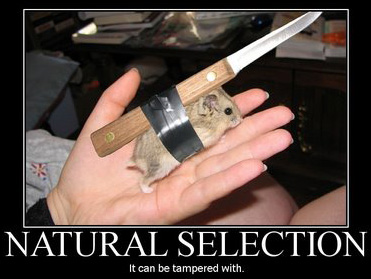 Poor Darwin. Although clearly a brilliant man, his theory of Natural Selection failed to take into account the possibility that medical science would eventually ensure the demise of his notion of “the survival of the fittest.” As if nature hadn’t already blessed the dim and the keenest of underachievers with the best reproductive systems known to man, medical science is now intervening to ensure that even our most medically mediocre citizens can assist in out-breeding the rest of us. He must be turning in his grave.

That’s ok. I can deal with the fact that some are willing to blow caution to the wind for their chance at creating the next American Idol (or even the next Jeffrey Dahmer) both of which seem to have replaced the traditional desire to have a future United States President suckling at their teats. But what’s wrong with the Chinese idea of one shot at infamy per household?

Perhaps I’m just bitter. Pro-creation has always been a sticky issue for me. I would feel more at ease talking about intercourse with barn yard animals at a PETA convention than trying to convey common sense notions of population control with the righteous, right-wing Joe The Plumbers of this world. The right to spread ones legs and spew out litters of babies seems to be the only true inalienable right which is left to us.

It’s irritating that one can hardly make it through the day without encountering rules and regulations created to protect us (and of course our precious children): I have to wear a seatbelt while driving; I can’t cut someone’s hair without a license; and I have to wash my hands by law if I so much as touch my face while slinging burgers at McDonalds. So it disturbs me greatly that as a society we breed incessantly without any regard to our collective future, or what junk we want to see roaming the streets within our short lifetimes. No school classes, no drug screening, no minimum credit score, no proof of mental stability (or even income – even employment). No pre-requisite whatever. Just plug and play. 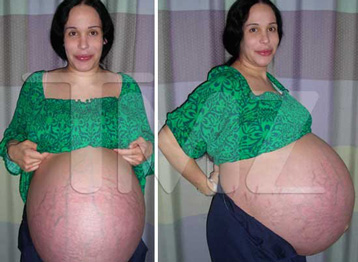 Enter Nadya “donations-please” Suleman. It’s not clear why anyone would actually desire eight screaming brats (particularly if she has six already); but then again she doesn’t deserve death threats either. Of course, had this taken place within the context of a married “Christian” relationship, such details could have been happily overlooked in the midst of such a “miracle” birth, and the local church would have started a Pampers drive the moment her blessed water had broken. However the local church denies any such interest.

For whatever reason – maybe because she struggled with mental illness before her octuplet pregnancy and wanted two million for her story, or maybe because she chose to be a single mother and is on food stamps, or perhaps because three of her first six children receive disability payments and she didn’t tell her mother (with whom she lives) about the $167,000 in disability payments she herself received, or maybe even just because she’s not white enough – or has rather odd-looking lips, Nadya Suleman has sparked a chorus of disapproval within the ranks of the otherwise caring “family” classes. Folk who are normally so pro-life that even the disposal of soggy, post-pleasure Kleenex tissues would be considered tantamount to abortion are now willing to chase down the doctor involved for allowing this birthing bonanza to happen. All of this disguised by a “genuine” concern for the well-being of the children, of course.

So here’s my dilemma: While this Amazing Human Incubator makes my point for some form of Federal birth-control better than I ever could, the hypocritical, every-sperm-is-sacred, religious right, who are most in need of having their tubes tied, appear to be complaining the loudest.

I’m torn. I just can’t decide who should face the firing squad first.

If only I had children of my own to debate this with.

Newer PostGays In The Military?
Older PostName That Flag!