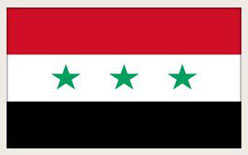 Not Sure? I know, flags aren’t your thing. Mine neither, but shame on us. Shame on this county’s education system. And we wonder why the rest of the world has a problem with America.

Here’s an interactive map of the Middle East – you know, the part of the world that we bomb a lot, and with which the vast majority of Hillary Clinton’s time will be spent as Secretary of State.

Click on the map below. Take the test. Can you name a single country? Once you’ve embarrassed yourself, try naming the head of any of these important countries: Iraq? Israel? Saudi Arabia perhaps, who sent the 9/11 hijackers – home of Osama Bin Laden?

After a decade at war in the middle east, most American’s couldn’t find Iran on a map if their lives depended on it. (In fact they do depend on it.) 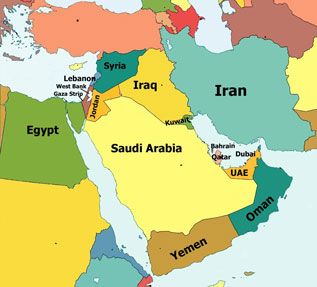 America can be remarkably introverted at times. Am I blind, or were there no foreign dignitaries at President Barack Obama’s recent inauguration? After an entire day in front of the television yesterday, I don’t think I saw one. And yet this event was reported worldwide and graced the front pages of every newspaper this morning across the globe.

Yes, this was America’s special day, but how can we expect to get the respect and attention of the rest of the world when we act as if they don’t even exist? Where was our close ally, the Prime Minister of England? At Lady Diana’s funeral there were dignitaries from all over the world. There will be again at the next coronation. Where were the representatives of our neighbors in Canada and Mexico? Obama was recently welcomed in Berlin during the primaries to huge crowds; was the German chancellor invited on the big day?

The rest of the world has a problem with America because we’re oblivious to its very existence. We don’t even know who we’re at war with – or who our geographical allies are.

The truth is that until this country starts to realize that it is not the center of the universe, we will continue to have disastrous foreign relations issues that will cost American lives.

Oh, and the flag?

Iraq. Just the country we’ve been at war with for the last decade.